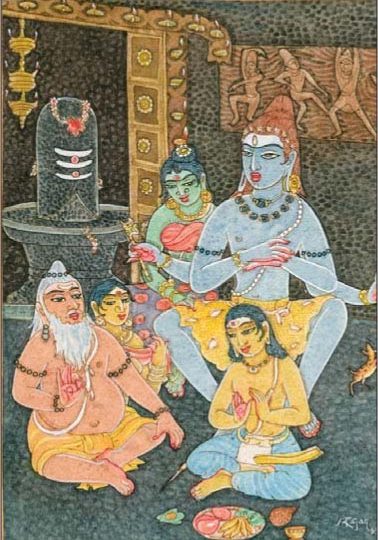 All great ones have undergone suffering.
No one can escape what is ordained.

The false belief that this hell-like house called body is me, is Naraka himself. To destroy that false belief and let the self shine as Self is Deepavali. Ramana Maharishi

Friends, though endowed alike with sight and hearing, may yet in quickness of mind be quite unequal. Some are like ponds that reach to mouth or shoulder, while others resemble lakes deep enough for bathing. Rig Veda 10.71.7

Awareness puts us in tune with the elements. This elemental connection is part of being alive. We are too often indoors, unaware of the elements. The elements are not our enemies; we ourselves are made of the elements. When we connect with them, they inspire us and make us stronger, allowing us to communicate with the world in much subtler ways. Sakyong Jamgon Mipham Rinpoche, head of the Shambhala Buddhist lineage

When the highest flight of spiritual experience is reached, then both the individual soul and personal God merge in Brahman, and the three become one. Brahman alone exists. Swami Nikhilananda (1895-1973), accomplished writer and thinker, direct disciple of Sri Sarada Devi

Whether Hindu or Muslim or Christian, whoever tries to convert, it’s wrong, not good. Dalai Lama, speaking at the Kumbha Mela

I do not know when I will die, and I have neither time nor reason to beg for food. Even if I were to die from the cold, I would have little reason for regret since it would be for the Dharma. Mila Repa, 9th century yogi, replying to his mother and sister who were begging of him to eat and wear clothes again

If you consciously hold within yourself three quarters of your power and use only one quarter to respond to any communication coming from others, you can stop the automatic, immediate and thoughtless movement outwards, which leaves you with a feeling of emptiness, and of having been consumed by life. Let this become your way of communicating with others. Jacob Needleman, American philosopher, author and religious scholar

Experience has taught me that silence is part of the spiritual discipline of a votary of truth. Mahatma Gandhi

Our aim is not to become the world’s best athlete. Our aim is to keep the body fit, to develop dynamism and to give the vital innocent joy. Our aim should not be to surpass others, but to constantly surpass our own previous achievements. Sri Chinmoy, (1931-2007), renowned spiritual leader, author, poet, artist, musician and athlete

We need not seek a cause or a motive or a purpose for that which is, in its nature, eternally self-existent and free. The sole object of the dance of Shiva is the dance itself. Sarvepalli Radhakrishnan (1888-1975), first Vice President of India

One big difference between Hinduism and other faiths is that it does not proclaim that it alone shows the path to liberation. Hinduism has not practiced conversion, and the reason for it is that our forefathers were well aware that all religions are nothing but different paths to realize the one and only Paramatman. Chandrashekharendra Saraswati Swamigal (1894-1994), 68th Jagadguru of the Kanchi Kamakoti Peetam

God exists in your destiny just as much as he does in these mountains and in that lake. It is very difficult to understand this, because man is moving further and further away from Nature, and also from himself. Hermann Hesse (1877-1962), German-Swiss poet, novelist and painter

If you are patient in one moment of anger, you will escape a hundred days of sorrow. Chinese saying

For those uncomfortable with the idea of religion, I would say it is important to distinguish between religion in the sense of traditional ceremonies held in a temple, church or other religious building, and the concept of religiosity—which is one’s personal devotion to the Divine, however you define that Holiness. Satguru Bodhinatha Veylanswami, publisher of HINDUISM TODAY

The superconscious mind, the mind of our soul, knows and inspires good conduct, out of which comes a refined, sustainable culture. Satguru Sivaya Subramuniyaswami (1927-2001), founder of HINDUISM TODAY

From North to South:
India’s Straight Path to God
IMAGINE YOU ARE BUILDING A temple in India thousands of years ago. Without tools of great precision and no method of zooming out to survey the land except from the highest peaks—could you build several temples from one end of the country to the other, in a straight line? Well, somehow, at least seven ancient Siva temples, from Kedarnath in the most northern part of India, down to Rameswaram in the South, fall on a near perfect geographic straight line.

Even more amazing is the fact that the five elemental Siva temples in South India fall on this line: Thiruvanaikoil (water), Thiruvannamalai (fire), Kalahasti (air), Kanchipuram (earth) and Chidambaram (akasha). Also sitting on this line are Kaleshwaram Mukteswara Swami Temple in Telangana, famed for its two Siva Lingams on one pedestal and Kedarnath Siva temple located in the Himalayas at 12,000 feet.
The variation is from .07 to .91 degrees, they lie within “one degree” of each other. The distance measured by one degree varies with the distance from the equator, getting smaller as one goes north or south.
You’ll notice Kedarnath and Tiruvannamalai are directly aligned, and Shrikalahasti, Kanchi and Chidambaram within .01 degree—at Chidambaram’s latitude of 14° north, that’s less than one mile! Did someone do some careful supernatural planning back then?

What Are the Primary
Festivals for Siva?

MAHASIVARATRI, SIVA’S GREAT NIGHT, venerates Parasiva. Krittika Dipam celebrates the infinite light of Parasakti. Ardra Darsanam invokes the blessings of Paramesvara—Lord Siva Nataraja in His blissful Cosmic Dance.
Mahasivaratri is the night before the new-moon day in February-March. We observe it both as a discipline and a festivity, keeping a strict fast and all-night vigil, meditating, intoning Siva’s 1,008 names, singing His praise, chanting Sri Rudram, bathing the Sivalinga and being near the vairagis as they strive to realize Parasiva.
On Krittika Dipam, the Krittika nakshatra in November-December, we honor—with oil lamps everywhere, village bonfires and special temple arati—God Siva as an infinite pillar of light. This is an important festival in Murugan temples. On Ardra Darsanam, during the Ardra nakshatra of December-January, Lord Nataraja receives elaborate abhisheka and is beseeched for yogic union, prosperity and matrimonial success. He is again lavishly invoked on the Uttaraphalguni nakshatra in June-July and on four other days each year. Special monthly days for Siva worship are the two 13th tithis, called pradosha.
The Vedas proclaim, “The Lord, God, all pervading and omnipresent, dwells in the heart of all beings. Full of grace, He ultimately gives liberation to all creatures by turning their faces toward Himself.” (Svetasvatara Upanishad 3.11)

Sixty-eight lessons based on Satguru Sivaya Subramuniyaswami’s Master Course Trilogy for passing our tradition on to the next generation, and the next…

Path to siva presents all of the important teachings of the Saivite religion. It is written with youth in mind, but is also ideal for anyone wanting a condensed version of Gurudeva’s 3,000-page Master Course. Each illustrated lesson is short—just one or two pages—but packed with information. Here our youth can find answers to questions about God, Lord Ganesha, Lord Murugan and the devas—how they can help us in our lives and how to contact them through temple worship and home puja. You will find clear explanations of karma, dharma and reincarnation, and how to use japa, meditation and affirmations to make your life better. You will learn the best ways to live in order to achieve your most important goals. The lessons include insights on home life, getting along with others, religious tolerance, vegetarianism and caring for the environment. They cover challenging philosophical areas, like death and dying, sin and evil. These short essays will provide a clear understanding of Hindu practices, beliefs and philosophy and give you a deep comprehension of life that few people have. The book was designed as a tool for teachers and for parents with youth, a focus text for exploring Hinduism together. Discussing one lesson a week can keep the family conversation going for more than a year.