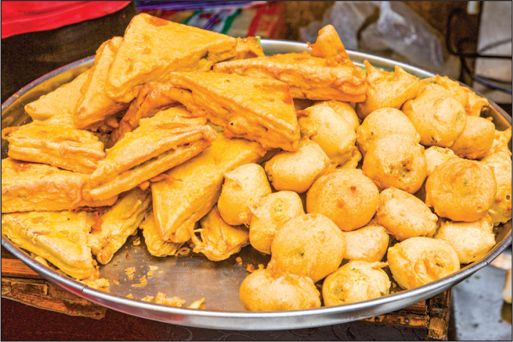 ABILLION PEOPLE CAN’T BE WRONG—they swear by the tangy, sour-sweet, spicy street foods of India. And perhaps no city has more varied street foods than Mumbai, which gets its name from Mumbadevi, the Goddess worshiped by the Koli tribes of fishermen who originally inhabited the islands [see Her story p. 36-37].

Indeed, there is something homey and comforting about the street foods of India, almost like the hug of a mother. Not surprisingly, many of these treats are an indelible and long-standing part of Indian tradition. According to K. T. Achaya, author of Indian Food: A Historical Companion, many of the street foods of today can be traced back at least to 1129 ce, when the Sanskrit work Manasollasa, attributed to King Someshwara, mentions many of the delights. Purana was the puran poli flatbread of today, sevika our sev spiced potatoes and onions; dhosakaour dosa rice crepe and idarika was our idli, steamed rice cakes. The South’s famed roasted vadas and bajjis (both fried snacks, often with onions or potatoes) are described in early Tamil literature. The Varanaka-Samuchayaof 1520 ce mentions many of today’s Gujarati snacks, including deep-fried rotli flatbread, spiced paratha wheat flatbread and vegetable stuffed puffs called gujiyas. These snacks have stood the test of time.

Each city has some nibbles which are common to all of India and others which are special to the area. Mumbai is one city which has welcomed dreamers and strugglers from every state, so you find almost every regional food on its streets. Here we have showcased a sampling of the vegetarian offerings. Mind you, while some of India’s “street foods” are relatively simple, most are complex creations for which we have space for only a brief description

Those halcyon days of street food adventures came to mind, days when germs and Bombay belly were unknown to us and we would eat just about anything and survive. Now, decades later, I revisited the back-lanes of childhood, to taste and embrace the lost joys of street food. Although I have been living in the West, where we get sanitized and gentrified versions of these edibles created by trained chefs in hotels and restaurants, over a billion Indians can’t be wrong. They still swear by the street eats which exist all over India—in villages, towns and cities—and the business of eating under the skies is alive and well.

In India you will find food vendors wherever there is a public area. Peanut, gram and coconut sellers ply the Queen’s Necklace waterfront and the Gateway of India along with pappad-wallahs carrying their crispy wafers in a basket balanced on their heads. These hasty, tasty munchies are always light on the pocketbook (12 rupees for a samosa, up to 65 for biryani) and yet fill you up.

It is food you can carry with you as you run to catch a local train, bus or yellow taxi, or munch as you walk to where your feet can take you, on crowded road and overhead pedestrian bridges below which churns chaotic traffic.

Mumbai, without a doubt, is the epicenter of Maharastrian viands such as pav bhaji, vada pav, bhel puri, and ragda pattice. These are authentic Mumbai snacks and are found everywhere, in many of its 1,500 restaurants but most deliciously in its roadside avatar as street foods, along with South Indian specials, Gujarati thali full meals and spicy chaats or snacks to wet the appetite.

While there are scores of vada pav wallas all over Mumbai, I went to a famous vendor who had started in the streets but became so popular with a mass following (and that before the days of social media) that he started his own shop where today long lines form to get a taste.

In Colaba, in Pasta Lane, you have Kailash Parbat, the old eatery which is now gentrified but which offers the spicy pani puris and chaat papri which are the must-haves. It also offers mithais and specializes in Sindhi goodies. Around Holi, they bring out geyar, a flat, bigger version of the syrupy orange jalebis.

Mumbai is also famous for its Khau Gallis or “eating streets” where you can get a cornucopia of regional treats. Close to the Churchgate Railway Station is one such lane—a wondrous warren of small shacks which offer foods to the locals, working people and students. There is such a vast variety that you can be completely overwhelmed!

A bustling Khau Galli also exists in Zaveri Bazaar, a crowded jewelry district with countless gold wholesalers, ramshackle buildings and nonstop traffic. We tried a papad—the light deep-fried discs usually of gram flour—from Gopal, a young vendor who had quite a menu and kept producing different ingredients from his magic cart. Close by was a place where you could get spicy chole (chickpea curry) from huge vats and puris, fried ballooning breads.

What’s on Your Plate?

Walking down the twisted lanes, I came across another vendor selling hot green chutney pakodas, a deep-fried treat I used to relish in my college days. This stall was disconcertingly right next to a stand selling footwear, and seemed to have a buzz of flies which are just about everywhere in the Mumbai heat. The pakoda salesman had an assistant who was splattering green chutney on the slices of bread and dipping these sandwiches in a besan or gram flour batter before deep frying in a vat of hot oil, right on the sidewalk. The result—crunchy, crispy golden chutney pakodas. Delicious!

Street-eaters can actually get quite healthy food, too. Other favorites watermelon chunks, as well as mixed bananas, guava, cucumbers and potatoes. These are all served fresh with a generous squeeze of lemon juice and some spices which really wake up the taste buds.

Mumbai’s beaches are not used for swimming or sunbathing as in other countries, but rather for family outings and strolls along the water’s edge as the waves hit against the shore. The two best known are Chowpatty and Juhu; both are wonderlands of street food.

My childhood memories of Chowpatty are blurred, but I do have a faded black-and-white photo which shows me as a five-year-old, sitting with my family on a bench, as they dig into plates of chaat. Chowpatty, with neon lights decorating the little seaside shacks, has still a fairyland look, and I am sure children today love the experience as I did. Be it vada pav, bhel, pista or pistachio kulfi—everything is available and for just a few rupees.

I also journeyed to Juhu Beach, and here the scenario had changed. While there were still cart vendors on the sands, they were a handful amongst the many strollers and frolicking families. Most vendors are now housed in a covered building on the beach. Here you have small stalls of every street food imaginable—sizzling tikkis (potato turnovers), dosas, vadas and chaat of every variety. The bustling crowds love this modern setup, which is definitely an improvement for the vendors’ lives and business.

As the golden sun was setting over the Arabian Sea, turning the sky a flaming orange, we left the expanse of the beach for the chaos of the crowded streets of Bandra. Arun, our photographer who is a Mumbai native, showed us where everyone goes to end a day of street food binging—a paan-wallah’s stand.

Paan, a rolled-up betel leaf stuffed with condiments, is a mouth freshener and sweet ending to any feasting in India. Since Juhu Beach is in the suburb of Bandra, where many of the Bollywood stars live, some of these celebrities drive by in their limousines to pick up a fresh paan. The store is just a small hole in the wall, but noted celebrities like Amitabh Bachchan have stopped by for one of their famous juicy paans topped with inedible silver foil. That is the ultimate in street food, so I just had to have one! The young owner who was carrying on his father’s legacy whipped up a special paan for me and shared some succulent Bollywood tales, too.

As I ended my street food journey, I realized that the past doesn’t really vanish—it just realigns itself as memories and mixes in the present. I was happy to revisit my childhood haunts and see that the vibrancy of street food is still there, creating memories for a whole new generation.

You don’t need a fortune to be happy here—a spicy plate of paapri chaat or a bhel puri will do the trick!

Lavina Melwani is a journalist who blogs at Lassi with Lavina (www.lassiwithlavina.com)