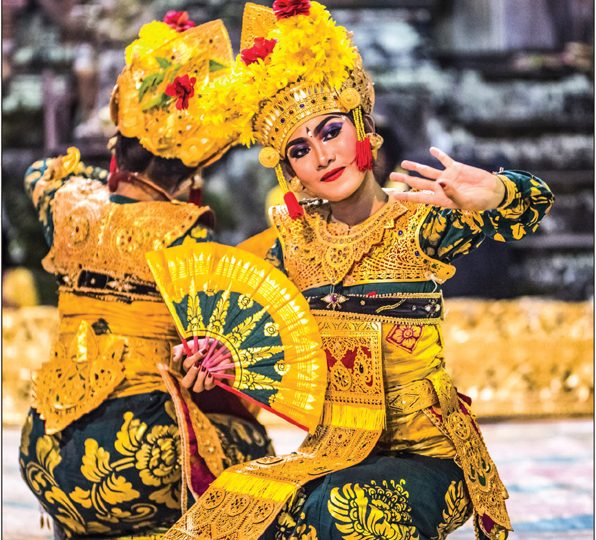 Bali Bans the Commercial Use of Sacred Dances

IN SEPTEMBER 2019 THE BALINESE GOVERNMENT made a move to help prevent Bali’s cultural and religious traditions from being commercialized. The island nation has banned the commercial use of 127 sacred dances, because these were starting to be used for tourism rather than worship. A joint statement by the government and several concerned institutions read: “We prohibit all parties from demonstrating/showing/staging/performing all kinds of sacred Balinese dances beyond the sacred purposes of Hindu ceremonies.”

This statement is meant as a nation-wide agreement, not a punishable regulation. Its purpose is to make clear to all Balinese that the sacredness of these dances is to be protected.

Balinese cultural agencies have identified three major categories of Balinese dances. Dances in the Wali and Bebali category have religious meaning and come under this ban, while dances of the Balih Balihan type are meant as entertainment and may continue to be performed as such.

As stated by Bali deputy governor Tjokorda Oka Artha Ardhana Sukawati (a dancer himself), “I never think about how many people will watch me dancing. I never think whether people will applaud me or not. For me, it’s all about sincerity—a 100 percent offering to God.”

A Renewed Chariot Festival at a Time-Honored Temple

ON JULY 30, 2019, FOR THE first time in 29 years, devotees at the Maviddapuram Kandaswami Kovil’s Chariot Festival joyously paraded Lords Ganapathy, Sivan, Muthukumaraswami, Murugan (as Arumugaswamy) and Sandikeswarar through the streets of Maviddapuram on their respective chariots.

Thousands of devotees flocked to this holy village for the festival. They came from all over the island and even from other continents to receive the blessings of Skanda, Lord of Yogic Discipline. (Skanda is one of Lord Murugan’s many names.)

This is an annual 25-day festival, with the parade being held on the 24th day; but the last time all five chariots were paraded together was in July of 1990, not long before all local residents were forcibly removed from the area due to the civil war. The temple itself was damaged by artillery and its contents looted; but like many temples throughout the Jaffna peninsula, it is being returned to its former glory through repairs and new construction, partially sponsored by the Tamil diaspora.

The beautiful construction of Lord Murugan’s newly built chariot delighted pilgrims attending its inaugural parade. Its base is covered with nuanced carvings from the Skandapurana. In its middle level, Arumugaswamy sat on His throne, surrounded by meticulously painted wooden pillars, bright fabric and a silver cap piece.

Another Blow to the
Unlikely Aryan Invasion Theory

A NEWLY PUBLISHED PAPER, available at the National Center for Biotechnology Information’s website, reports that the skeletal remains of a 5,000-year-old woman (from around 2800bce) were recently found at a Harappan site. Miraculously, one bone from the inner ear held usable DNA. The DNA was found to be unique to the Indian subcontinent. This finding disputes the common theory that the original inhabitants of India came from the West. Much more likely, it seems, people migrated from India to the West.

The introduction of the original paper speaks for itself: “We report an ancient genome from the Indus Valley Civilization (IVC). The individual we sequenced fits as a mixture of people related to ancient Iranians (the largest component) and Southeast Asian hunter-gatherers, a unique profile that matches ancient DNA from 11 genetic outliers from sites in Iran and Turkmenistan in cultural communication with the IVC. These individuals had little if any [Eurasian] Steppe pastoralist-derived ancestry, showing that it was not ubiquitous in northwest South Asia during the IVC as it is today. The Iranian-related ancestry in the IVC derives from a lineage leading to early Iranian farmers, herders and hunter gatherers before their ancestors separated, contradicting the hypothesis that the shared ancestry between early Iranians and South Asians reflects a large-scale spread of western Iranian farmers east. Instead, sampled ancient genomes from the Iranian plateau and IVC descend from different groups of hunter-gatherers who began farming without being connected by substantial movement of people.”

IN ANOTHER SMALL MOVE towards religious tolerance, the United Arab Emirates has granted official recognition to a Hindu temple, along with 17 Christian places of worship. A ceremony was held in late September at the Emirates Palace in Abu Dhabi to commemorate the event. Dr. Mugheer Al Khaili, chairman of the city’s Department of Community Development, which held the event, stated, “The UAE is keen on embracing unity and promoting the inclusion of everyone who has contributed to the development of the country… With this new initiative, places of worship will now be working and operating under one umbrella.” According to these new policies, members of all religions can practice their faith freely within the laws of the Emirates. The UAE, population 9.4 million, is 76% Muslim, 13% Christian and 7% Hindu.

IN AUGUST 2019, THOUSANDS of devotees once again joined together in the Altare region of Northwest Italy to celebrate Ganesha Chaturthi. The bulk of the celebrations took place at Gitananda Ashram and were carried out at their Shri Lalita Mahatripurasundari Temple.

The event drew devotees from many parts of Italy, Switzerland and France, many of them originally from India and Sri Lanka. Together they paraded Ganesha on a palanquin, observed a traditional homa and enjoyed Indian dance, while singing and worshiping throughout the day.

A New Animated Series Full of
Hindu Gods and Goddesses

NETFLIX HAS RECENTLY announced a new animated series, “Ghee Happy.” This lighthearted, beautifully animated story is meant for young children. It follows the adventures of the “Bala” versions of Hindu Gods, placing them as youngsters in a daycare while they discover their powers together.

The project comes from artist Sanjay Patel, who has long worked with Pixar Animation and helped create such well-known films as Ratatouille and The Incredibles. You may have seen Sanjay’s short film titled “Sanjay’s Super Team,” which was nominated for Best Animated Short Film at the 2016 Academy Awards. Sanjay told NBC News that part of his drive is to help young people of similar cultural descent. Here they can “see themselves normalized in pop culture and recognize that they matter and are included.” He explained that “for me, growing up between two cultural identities, it felt enormously important to see that I wasn’t alone in that experience.” The series will be produced at Netflix’s animation studio in Los Angeles and will likely start streaming within the next few years.

IN A NEW PROJECT UNDERWAY at the ancient city of Varanasi, 525,000 square feet of land leading from the banks of the Ganga to the famed Kashi Vishwanath Temple has been acquired by the Uttar Pradesh government. With supervision from India’s central government, the project’s goal is to create an open corridor for pilgrims and local worshipers to replace the narrow streets, houses and shops that had been there prior.

According to an article in Fortune India, the buildings purchased for the project included the homes of nearly 250 families as well as 100 small businesses. The pilgrim corridor will include museums, eateries, public restrooms, a library and abundant open space. It will help immensely with the large annual festivals which take place at the temple. Previously during these events, thousands of pilgrims would stand in line for hours without basic amenities. For a full 3D layout of the plan by Gujarat-based architecture firm, HCP Design, see: bit.ly/kashi-corridor

AFTER TEN YEARS IN CONSTRUCTION, one of Europe’s largest Hindu temple complexes has been completed. In early September, the temple in The Hague, Netherlands, observed a festive opening. The complex includes a temple, large kitchen, and cultural center for the wider Hindu community. Around 200,000 Hindus currently live in the Netherlands, many having moved there from Suriname, a former Dutch colony.

SINCE 1990, NEW YORK’S METROPOLITAN Museum of Art has acquired 15 antiquities that are now under investigation. The pieces may have been part of a looting by the infamous Manhattan art dealer and smuggler Subhash Kapoor. This is part of an effort by India’s government to recover tens of thousands of sacred relics that have been plundered over the last century.

IN 2006, THE HIMACHAL PRADESH government, led by Virbhadra Singh, became the first Congress-ruled state to pass an anti-conversion law. In late August of 2019, the state House unanimously passed a bill that increases the punishment for the crime of religious conversion. As State Chief Minister Jai Ram Thakur said, “the earlier law was just cosmetic.”