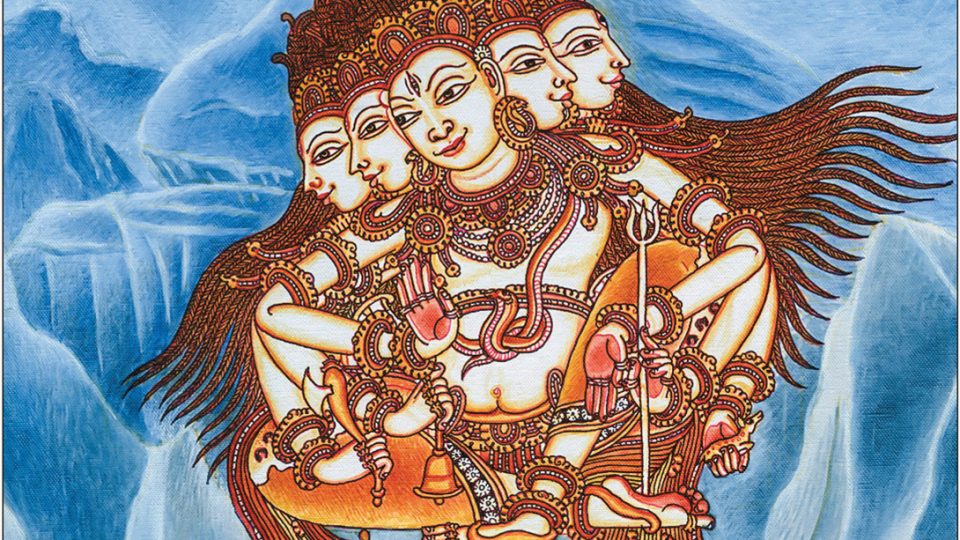 A Universe Unfurling from Within

The following is Part Two of a lucid translation of Vyoma Vyapine, a long mantra often chanted by priests during temple puja. This mantra is found in Chapter 10 of the Raurava Agama.

Parameśvaraparāya. Mahesvara, being superior to all Rudras, is the God of Gods.

Vyoma Vyoma. Since Lord Bhagavan is associated with the qualities and attributes of space, He is called Vyoma. In this Agama, vyoma is stated to be of two kinds: supreme and non-supreme. In the supreme space, Lord Siva exists eternally. The non-supreme space is within the limits of maya. Lord Shankara (Siva) presides over this space and regulates its functions through the rays of His Shakti. Since Sadasiva pervades all throughout the supreme and non-supreme spaces, He is invoked with the repetition of the term vyapi.

Prathama Prathama. The supreme yogi and knower of all.

Tejastejaḥ. Since He is the primal source of illumination for the souls living in the realms of pure maya and impure maya, Lord Siva is revered as Tejastejah.

Jyotirjyotiḥ. As the primal source of light needed to illumine objects within pure maya and impure maya, He is called Jyotirjyotih.

Arūpa Anagni. The self-manifest fire, not produced by an external source. The unborn one.

Anāde. Being one with beginningless and endless knowledge.

Om Bhūḥ. The core meaning of these two syllables is satya—eternal existence. As such, they denote the three eternal categories—Pati, pasu and pasha.

Om Bhuvaḥ. All the worlds, existing in all through the tattvas in a systematic order, are collectively denoted by this mantra.

Om Suvaḥ. Lord Siva who appears with a form fit for meditation and worship, to be meditated upon constantly by yogis.

Nidhanodbhava. Dissolving into their causal source everything that has been created and again creating it from the same source.

Śiva Śarva. Lacking even a taint of imperfection and inauspiciousness.

Paramātman. Occupying the body and soul of highly enlightened yogis and sages and shining forth as the Great Self in all of them.

Maheśvara. Lord Siva is in the exalted state of being—Ishvara—to be worshiped by all the Deities.

Mahādeva. Siva as the highest position of authority in the space of supreme consciousness.

Sadbhāveśvara. Those Beings who are in deep communion with Siva as Ishvara (who are called Isvara, but are not the highest form of Ishvara).

Mahātejaḥ. Siva’s effulgence as superior to the brightness of even the greatest luminous objects.

Yogādhipate. Siva as the perfect, disciplined yogi, Master of the path of supreme yoga.

Muñcha Muñcha. After binding souls in maya to experience their karmic fruits, Bhagavan releases them through initiation.

Prathama Prathama. He scatters abundantly the bhogas (objects of enjoyment) for the sake of bound souls. It is only through traversing the experiences afforded by the bhogas that the soul can eventually become free from the bondage of karma.

Śarva Śarva. The protector of all souls which take refuge in Him. Provider of shelter and protection, relieving the fear born of transmigratory phenomenon.

Bhavodbhava. Siva assumes various forms according to His own disposition in any given context (bhava), while He also assumes forms as conceived by yogis and devotees (udbhava).

Sarvabhūta Sukhaprada. The Lord of supreme consciousness grants all embodied souls total liberation from the repeating phenomenon of birth and death. In this liberated state, they enjoy infinite, incomparable bliss that is unknown to the mundane world.

Sarvasānnidhyakara. At the very instant of the sadhaka’s contemplation upon Siva’s form, the Lord readily offers His vibrant presence in the Sivalinga.

Brahma Vishnu Rudra Para. Brahma, Vishnu and Rudra are respectively responsible for the creation, maintenance and reabsorption of all the worlds. Superior to them is Paramasiva, their guiding Lord.

Anarchita Anarchita. He is within all subtle things. In all that changes, He is present within those changes without losing His immutability. He is present within all that is concealed. He is within all that is incomprehensible and inconceivable. He remains reachable exclusively to all those who have gained perfection through the path of wisdom. Because of these characteristics, the Lord of Consciousness remains unreachable through exterior worship alone (anarchita).

Asamstuta Asamstuta. By remaining unseen by Brahma and other Gods in His essential state, there is no hymn in praise of His essence, for it is beyond the grasp of word and mind.

Pūrvasthita Pūrvasthita. He who is eternally established in the supreme space of consciousness, the originating source for all meditation and worship.

Sākhin Sākshin. He directly sees the positive and negative actions of all embodied souls, for all eyes are His eyes and He sees everywhere.

Turu turu. The Supreme Lord of all the Gods grants the state of oneness in identity between Himself and the competent Sadhaka quickly and without hesitation. He grants this exalted state through proper initiations. Turu, turu refers to the quickness of time in which this supreme state is granted.

Patanga Patanga. In the treatise dealing with the characteristics of mantras, it is said that the specific name for effulgent form is “Patanga.” In view of His exceeding resplendence, Siva is thusly named.

Pinga Pinga. Those who know well the mantras and the Agamas state that the nucleus within the cosmic luminosity is denoted by the term pinga. Since Siva is identical with this core substance, He is praised as Pinga Pinga.

Jñāna Jñāna. Supreme knowledge is that which leads to the essential state of Sivaness. This knowledge is of two kinds, para and apara. It is not explained in scriptures other than the Agamas. It remains untold because of its incomprehensible, subtle and vast nature. It is all-inclusive, extending in and through all systems of thought.

Śabda Śabda. The master of the transcendental sound which is subtle and inaudible to the ears. This sound is related to a deeper understanding of letters and to the rules of conjunction and separation of words.

Sūkshma Sūkshma. This term in praise of Paramasiva denotes subtle form which cannot be conceived by the mind.

Śiva Śarva. He is described as the knower of all, superior to all other Deities, the absolute controller of all, doer of all, absolutely independent. He resides within the heart of all souls, the performer of cosmic functions such as creation and maintenance for the benefit of all beings. He is with unsullied purity and everlasting bliss. He is supreme.

Sarvada. The term sarva denotes perfect wholeness in which all things exist in their totality. It also denotes para (knowledge) and apara (the highest, secret knowledge). Through this knowledge He grants liberation from the bonds of maya and others. Therefore, He is praised as Sarvada: one who reveals all-inclusive knowledge and grants liberation through such knowledge.

Śivāya Namo Namaḥ. Lord Ishvara, equally disposed to all beings, possesses everlasting calmness. Because of such qualities, He is called Siva. The term namo indicates absolute Lordship. In the functions of the Lord, two states are observed—cause and effect, referred to by namo namah. In the causal state, there is the totality of all the objects in their subtle state. In the effected state, the objects get variegated. Such variegations are provided as realms of experience for souls, to relieve them from karmic bonds.

DR. S. P. SABHARATHNAM SIVACHARYAR, of the Adisaiva priest lineage, is an expert in ancient Tamil and Sanskrit, specializing in the Vedas, Agamas and Silpa Shastras. This excerpt is from his translation of the Raurava Agama.