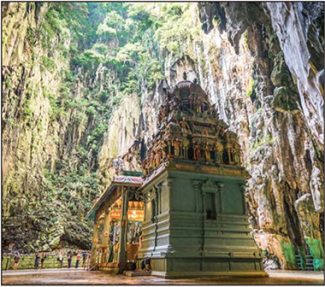 IN JULY, THE ARCHAEOLOGICAL Survey of India announced it found two chariots and eight well-preserved skeletons at Sinauli, an excavation site of the ancient Harrapan civilization. Sinauli, in Uttar Pradesh, has previously revealed other findings, such as skeletons and pottery—but never something so large as a chariot.

ASI director Sanjay Manjul reports, “The team found three of the skeletons placed in pedestaled coffins, and recovered remains of the two chariots, including wheels, axles and poles, leading to speculation that those buried in the chambers may have been royalty.” Swords with copper-covered hilts, shields, daggers, a helmet, beads and combs were also recovered.

According to Manjul, the remains may be from the later Harappan period, during the Copper-Bronze age. “The artifacts probably belong to a period between 2000-1800 bce. It can help us determine how those people lived. It may help re-evaluate how we understand the late Harappan culture. It is a significant development in the Ganga-Yamuna doab [land between the two rivers],” Manjul told ThePrint.

THE BAPS NORTH AMERICAN Youth Convention (NAYC18) in Atlanta, Georgia, saw over 10,000 youth attending in three sessions over a ten-day period: July 1-4, students grades 3 to 8; July 4-7, high schoolers; and July 7 to 10, college students—all came from across the United States and Canada. It took over 800 volunteers several years to create this massive event, with the overall theme being moksha, ultimate liberation from rebirth.

To express a sense of purpose, sincere effort in life, prayer, introspection and respect for the world around us, the convention planners provided entire group-interactive pujas with lotus aratis, skits that reflect everyday situations, interspersed with talks given by BAPS swamis. One of the amazing interactive experiences for the kids portion from July 1-4 was to wear a wrist band that lit up with the color of the character speaking on stage. In breaking the 4th wall, as the technique is known in theater, the children got the chance to become the main character and go through the same feelings, challenges, emotions and solutions.

The youth were then split up into smaller groups of 8-10 in order to have a chance to talk with a senior team leader about the topics expressed on stage.

North American Youth Conventions continue to be a pillar for BAPS North America’s youth activities as they address the important challenges faced on a daily basis by young Hindu Americans.

Hindus in malaysia are challenging a May, 2018, proposal to place oversight of Hindu temples under a national Hindu Endowment Board appointed by the government. In a May 28 press release, the Malaysia Hindu Sangam stated that the proposed board “is not the solution to the issue faced by the temples.” Earlier, according to the press release, the Sangam had called a meeting with the Hindu Advisory Board, prominent Hindu organizations and temples to discuss the proposed endowment board.

According to the Malaysia Department of Statistics, Muslims make up 61% of the population, Buddhists 19.8%, followed by Christians at 9.2% and Hindus 6.3%. The Sangam press release asks, “When there is no government intervention in any other religion or places of worship, why the Hindu religion, which is the smallest group, alone subjected to control?”

Dissatisfaction with the management of Batu Caves Murugan temple has, according to the press release, led to this call for the government to take over all temples. The Sangam’s national president, Datuk Rs. Mohan Shan, ends the press release by proclaiming, “It is our fundamental right to manage our places of worship!”

FOR THE PAST TWENTY YEARS, the Sri Lankan paper company Maximus has developed an unusual and environmentally friendly paper manufacturing process, thanks to organic waste produced by elephants.

These gentle giants are herbivores, large consumers of fruits and plants. They ingest up to 550lbs of food per day and produce more than 110lbs of droppings daily. Elephants do not digest the cellulose contained in plants, so their organic waste is rich in cellulose fibers—necessary for the manufacturing of paper.

Elephant droppings are collected, dried, washed and finally tinted without chemical pigments. From this the company creates natural, odorless paper, which is transformed into products sold in 30 countries around the world.

Starting as a small family business with seven workers, Maximus now employs 150 people in three locations, mostly in rural Sri Lankan areas. “Our intention was to develop a project that combines job creation for the local population, wildlife protection and elephant conservation,” reads the company’s website. A portion of Maximus’s sales goes to the Millennium Elephant Foundation, which is affiliated with the World Society for the Protection of Animals (WSPA).

IN JUNE, 2018, A STATUE DEDICATED TO THE ANCIENT INDIAN physician-surgeon Sushruta was put on display in Melbourne’s Royal Australia College of Surgeons. Sushruta is the first documented surgeon in the world. He is considered the father of surgery and a pioneer of plastic surgery.

Hindu School to Close its Doors

THE ONLY INDEPENDENT HINDU school in Europe, the Swaminarayan Independent Day School in Neasden, London, will close its doors by mid 2020, the Akshar Educational Trust announced in June, 2018. Trustees and governors of the faith school for ages 2 to 18 informed the community of the closing with a “heavy heart,” citing multiple reasons revolving around reduced enrollment and insufficient funds to properly renovate the aging building. An informed source said needed improvements would exceed $30 million.

Jitu Patel, chairman of the trust, explained in a statement, “Over the past few years, student numbers have been falling—from a peak of 515 in 2012 to 377 expected in September 2018. This downward trend is expected to continue. We recognise that the location of the school is not ideal, since the catchment area of the majority of its students is some distance away.”

He went on to say, “The trustees are duty-bound to act in a prudent financial manner and, in this respect, have projected future income against expenditure. When the financial situation is examined in detail, it is beyond doubt that a continuation of the school would lead to substantial losses which would, in all likelihood, continue indefinitely. Such a continuation is simply not sustainable in the long term, and it would be wrong to give a false hope or promise that it is feasible to continue to run the school in this manner.”

Addressing the disapproval of parents and students, Patel added, “We do recognise that emotions have been running high as the parents have had to face this difficult situation. We sincerely regret the sadness that this has caused to pupils, parents and staff alike.”

The statement said the Department for Education is in talks with Avanti Trust, which runs state-funded Hindu schools, to open a new school elsewhere in the borough.

In a separate statement released by Akshar Trust, many sources are cited to explain the growing difficulty UK schools are facing, including teacher recruitment and retention, and increased regulatory requirements for teachers and schools—with a focus toward faith schools.

The Akshar Educational Trust was established as an educational charity over 25 years ago with the blessings of His Holiness Pramukh Swami Maharaj. It is separate from Bochasanwasi Shri Akshar Purushottam Swaminarayan Sanstha (BAPS), which is a religious charity.

The day school, which opened in 1992 as the first of its kind in Europe, has 260 boys and 234 girls enrolled. A parent of a year 10 student reflected, “The parents and students of the school have always felt as one family with the teachers and each other, and the school is renowned for its excellent results year after year.”

On July 18, the issue was raised on the floor of England’s parliament by Virendra Sharma, who stated critically, “Education is not meant for profit, and any organization that fails to share that sentiment is not fit to run an educational institution. I sincerely hope that after this event, organizations such as the Akshar Educational Trust will prioritize the impact of its decisions on families over monetary considerations. The Akshar Educational Trust has stated that the reason for closing the school relates to regulations introduced by the Government, though I must express my disappointment in the revelation that money may have been a driving factor in the decision.”

In response to Sharma’s query as to whether government funding might be available, the Minister for School Standards, Nick Gibb, replied in the negative. “Every year, a number of independent schools close. Other schools open their doors in broadly the same numbers, but the profile of the sector tends to change over time in response to a number of factors, including market pressures.”

HOURS AFTER PRIME MINISTER Narendra Modi questioned the rule prohibiting photography at protected monuments, the Archaeological Survey of India, in July, 2018, lifted the ban on photography within the premises of all but three centrally protected monuments/sites. The three in which photography would not be permitted are Ajanta Caves, Leh Palace and the Taj Mahal at Agra.

RESCUED ON JULY 10, 2018, THE 12-member Thai soccer team that spent ten days trapped in a cave used meditation for survival. Ekapol Chanthawong, the 25-year-old coach, who was with the boys, is a former Buddhist monk. He spent a decade living as a monk and is a practitioner of meditation. It is that skill that has been credited with keeping the boys calm during the ordeal. In fact, when the British divers discovered them after ten days, the group was meditating.