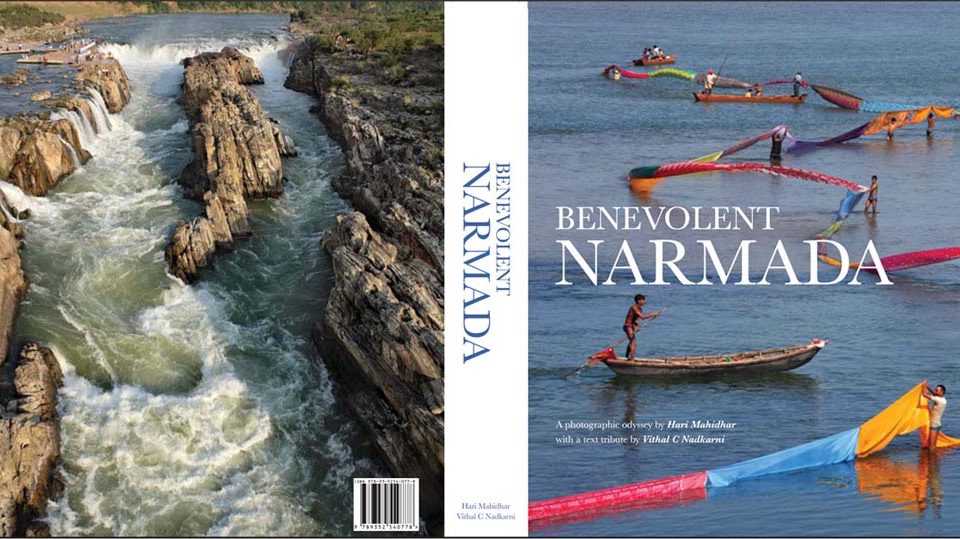 The inside story on Hari Mahidhar’s stunning photo-biography, a massive work in which our reviewer collaborated with his magic pen

Benevolent narmada is a gift of love and reverence by Hari Mahidhar, one of India’s most distinguished photographers, to the oldest and the holiest of the sacred rivers of India. This writer got the opportunity of providing the textual tribute to this opulent 304-page coffee-table book under mystifying circumstances. But let us first start with the genesis of the book with Mahidhar.

His “Aha” moment came when Mahidhar bought a book at Mumbai airport during one of his trips as a successful industrial and commercial photographer. This was the Ganga’s source-to-sea saga, shot and narrated by Italian photographer Aldo Pavan. Thames and Hudson, named after two iconic rivers, had printed the tome subtitled Across the Sacred Waters.

Mahidhar paid Rs 4,000 in September of 2007 for the volume, which served as a wakeup call to him. If an Italian had gumption enough to document the massive cultural aura of the Ganga in an alien land, what held back an Indian like Mahidhar, who had the additional merit of having spent his boyhood and teens on the banks of the Narmada at Jabalpur? More enticing, the great river had remained unlimned except for some travelogs (illustrated with drawings), and a couple of adventure books laced with stock photographs. Also, millions of pilgrims flocked to the river for the spectacular ritual known as parikrama or pradakshina (circumambulation) of the Narmada. This happens to be the only river in India with such an extensive pilgrimage. Yet, no one had yet done a source-to-sea photographic saga worthy of the river’s mindboggling diversity.

Mahidhar felt it would just be a matter of time before another foreigner breezed by to mock at our collective apathy by showing off their photo-biography of our (desi) Narmada. On the debit side, everything seemed to militate against such an odyssey: the sheer scale of the logistics involved, for example, and the complexity of terrain and cultural and ecological diversity, all seemed insuperable. On the plus side lay the opportunity of being virtually the first person to show off the monumental cultural and natural heritage of this most mystical of our great rivers. Of course, this called for Herculean amounts of resourcefulness to make most of the limited forays ‘stolen’ from a busy professional schedule. The alternative was to lose oneself in the rat race with no promise of self fulfilment. In retrospect, it seems like a no-brainer to have taken the plunge, without second thoughts or sponsors. As you handle the pages, you realize what a big decision this was.

The book that Mahidhar eventually ended up photographing took six years. He published it himself (with short essays and captions contributed by yours truly) and became its stockist/distributor as well. It was, therefore, a labor of love nourished with large dollops of personal sacrifice and self-discipline.
As a lad, the photographer, whose family owned a flourishing marble and tile business, had personally experienced the bounteousness of this great river, whose name literally means, “harbinger of joy” in Sanskrit. Another popular name of the river is Rewa or the “noisy one,” and also Shankari because of the birth-myth that links the river’s divine descent to the Supreme God, Shiva, also known as Shankar.

Mahidhar had also been entranced by her mind-boggling cultural aura, the seemingly endless cycles of fairs and festivals, the socio-religious pageants conducted on the banks of the river. The Narmada originates in Amarkantak in the state of Madhya Pradesh at the verdant trisecting point of the Satpuda, Maikal and Vindhyan mountain ranges, and flows westwards through three states for 1,312 kilometres, before draining into the Gulf of Cambay and into the Arabian Sea, 30 km west of Bharuch in Gujarat.

Mahidhar could easily have finished his book by concentrating on the river’s milieu at Jabalpur. But he wanted the grand prize; a pristine source-to-sea adventure to be sampled with all those untested (and untasted) risks that towered over the distant promise of potential reward.

In hindsight, our collaboration was most serendipitous. I came looking for a world-class photographer to document my own collection of votive folk bronzes. I wanted to share them with the world through images and the mother lode of stories, myths of them that I’d garnered as a peripatetic writer over the years spent in all sorts of situations (all this is better reserved for my forthcoming book called Icons of Peace).

In enviable contrast, Mahidhar had already made four presentation copies of his beautifully crafted book with rudimentary captions. He also had been able to present the first (out of four) copies to the Prime Minister Narendra Modi when the latter came to Mumbai for an election rally in November 2014.

To cut the story short, Mahidhar and I ended up with a barter. I would write the text for his book on the Narmada and he would photograph my Icons of Peace, otherwise known as Panchayatanas. Benevolent Narmada won the support of the Vasant J. Sheth Memorial Foundation and the Museum Society for its public launch in October, 2016, at Mumbai’s premier museum, Chhatrapati Shivaji Maharaj Vastu Sangrahalaya (CSMVS). In her introductory speech, Asha Sheth, the chairperson of the foundation, said she was amazed to discover that the Narmada was elder to the Ganga, not just in terms of age, but also in terms of religious priority. It’s not for nothing that devotees believe that so potent and pure is the Narmada, that even the Ganga has come to the elder river once a year in the form of a black cow to shed her sins.

As the granddaughter of the founder of Benares Hindu University, Pandit Madan Mohan Malaviya, Asha Sheth said she was conscious of India’s inclusive heritage that prompts us to invoke our divine rivers during bathing and ablution. Then we call for the sanctifying presence of the waters from the Ganga, Yamuna, Godavari, Saraswati, Narmada, Sindhu and Kaveri by chanting this verse: “Gange cha Yamune chaiva Godavari, Sarasvati, Narmade, Sindhu, Kaveri jalesmin sanidhim kuru.” For we believe that wherever there is water, there is Ganga, and the Yamuna and also the Narmada and the Sindhu or the Indus. The latter serves not only as the root for the very name of our country India, but also stands in as a unifying synonym for the all-embracing ocean.

The same feeling occurs in Western/Occidental tradition as well. At the end of his memoir A River Runs Through It, for instance, the American writer Norman Maclean says, “Eventually, all things merge into one, and a river runs through it. The river was cut by the world’s great flood and runs over rocks from the basement of time.” What an image this is: a gurgling stream cut from the primordial flood running over rocks hewn from the very basement of time.

This description perfectly fits the River Narmada. She was flowing when the continents of the world were fused together in one mass. Archaeologists say the Narmada-Son-Tapti lineament probably evolved some 4,000 million years in the Archean age on the super-continent called Pangea. There was no India at that time. But there was Narmada. The Narmada was flowing when Pangea broke off into Gondwanaland. She was flowing when a meteor struck the Jurassic world; when the Indian tectonic plate collided with the Tibetan plateau, which threw up the Himalayas and led to the formation of rivers like the Ganga and Yamuna.

No wonder our rishis praise the Narmada as the great survivor that out-lasted seven world-endings! Of all the seas and rivers of the world, she alone shall survive the future end of the world, they proclaim. Let us therefore also hail this most dependable and perennial of our lifesavers!

In her review of the book, Sumedha Raikar-Mhatre writes, “Benevolent Narmada grants precedence to the visuals of people-to-people exchanges. Its core lies in the humbling experience of Parikrama (3 years, 3 months and 13 days afoot) that the river offers as a treat. In Nadkarni’s fluid prose, it is a journey of the soul by the sole; a transformative walk along the river from its origin to its finish in the sea; encouraging devotees to leave behind narrow concerns and immerse themselves in an aseem parivar (boundless family), subsisting on alms and the kindness of strangers.”

Vithal C. Nadkarni is a senior consulting editor and columnist with the Times of India Group of Publications. He is also a fellow of the London-based 21st Century Trust and a recipient of the US-based Alfred Friendly Press Fellowship.