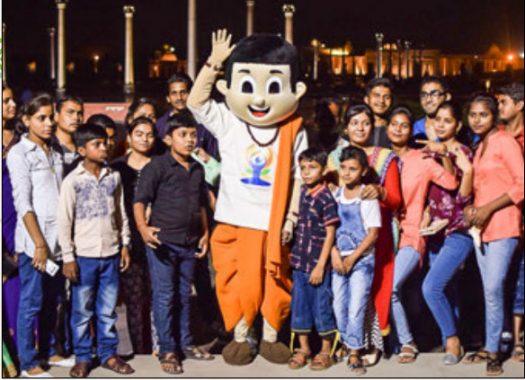 THE NATIONAL DIGITAL LIBRARY of India added 6.5 million books to their web library during June, 2017, in an initiative from the Ministry of Human Resource Development and Indian Institute of Technology, Kharagpur. All these books are free to download or read online. Including textbooks, audio and video content, this one portal offers over 8.6 million items in all—a massive collection of learning resources that gives students a powerful advantage at no cost.

The publications and media sources appear endless, though the site is not yet perfect—clicking on certain articles may bring up an empty profile page. Also, some material is sourced from other libraries or agencies, so you must request permission.

The search feature is fast and accurate, based on keywords from the title of the publication and the author or any profile keyword. The experience is similar to a Google search but yields more clearly defined results. Results from YouTube show up for video content just as if you searched using Google.
This database is a treasure trove for students who need to research a particular subject, author or field of study. Kudos to India for empowering students everywhere!

IN A CONCERTED EFFORT to restore temple lands to their rightful owners, the Tamil Nadu state government has recovered 5,559 acres of land owned by 789 temples in the last six years.
The Times of India reported that in July, 2017, documents presented in court showed that vast areas of temple land had been wrongly transferred to private persons during the implementation of the Updating Registry Scheme (UDR).

Government officials told The Times of India that when land records were being automated at that time, data entry operators—with or without connivance of government officials—forged documents, changing the name on the patta, or deed, in favor of individuals with names of Deities and temples. For example, lands held in the name of “Siva Nataraja” (a temple Deity) could be easily transferred to an individual of the same name.

The properties are mostly agricultural lands, but also include residential and commercial plots, some being used as tourist hotels.

Thousands of acres of temple lands still remain in private hands, but a senior official of the Hindu Religious and Charitable Endowments department counseled, “This is an ongoing process, and steps are being taken to restore temple lands.”

AFTER EIGHT YEARS OF RENOVATION, the Sri Sundararaja Perumal Temple of Klang, Malaysia, ceremoniously reopened its doors in April of 2017 to 100,000 devotees.
The largest Vaishnavite temple in Malaysia, it is often referred to as the “Thirupati of Southeast Asia” after its famous namesake in Andhra Pradesh, India.

Built in 1890, it is one of the oldest Vaishnavite temples in Southeast Asia. In 2008 it became the first temple in Malaysia to receive the ISO 9001 certification for efficient administration.
The extensive restoration of this iconic 127-year-old structure cost approximately US$2.3 million. Devotees are enthusiastically looking forward to another 100-plus years of worship!

CANADIAN PRIME MINISTER Justin Trudeau, alongside Sri Mahant Swami Maharaj, head of the BAPS Swaminarayan Sanstha, performed arati at the BAPS Swaminarayan Mandir in Toronto last July, 2017, at what is considered Canada’s most prominant Hindu place of worship. Trudeau joined the celebratory event marking the 10th anniversary of the mandir. The ceremony was attended by more than 7,500 devotees.

“The relationship between our two countries is truly a special one. It’s a relationship our government and our ministers both deeply value and actively cultivate,” Trudeau said during his speech. The PM went on to say he wanted to “recognize the importance of the bond between Canada and India. The more than one million Canadians of Indian origin have made countless contributions to our national fabric.”

Canada’s PM participated in the abhishekam ceremony in the main temple and also the arati, officiated over by the spiritual head of BAPS. At one point, Trudeau turned to the guru and said, “Please keep Canada in your prayers.”

He also pointed out the temple’s dashabdi, 10th anniversary, coincides with Canada’s 150th year of merger, by which the British colonies of Canada, Nova Scotia and New Brunswick were united into one Dominion of Canada on July 1, 1867.

THE SHREE RAMANA MAHARISHI Academy for the Blind (SRMAB), based in Bengaluru, India, is the humble creation of a group of selfless, dedicated visionaries who were inspired by the life of Sri Ramana Maharishi (1879–1950), the Hindu sage of Arunachala, Tiruvannamalai. SRMAB was founded in 1969 with the motto, “Service to Humanity is Service to God.”

Focused on the ideal of a participative, rights-based, barrier-free society, the Academy strives in many ways to break down the social barriers typically faced by differently abled persons. By providing them with education and many other needed services, it creates opportunities for them to integrate into the societal mainstream as self-reliant members and live life to the fullest.

Its multifaceted activities provide services in the field of health, education and socioeconomic rehabilitation to people from urban and rural areas. People with disabilities are empowered so that they can actively participate in community events and are able to contribute to society. The academy provides education along with accommodation, vocational training and rehabilitation, livelihood support, and social empowerment to persons with disabilities. All services are provided free of cost.

The academy’s newsletter, which can be read at their website, is written largely by the children themselves. The founder and president, T.V. Srinivasan, explains that this “not only improves their communication skills but also allows them to speak to you directly about their school.”

Dance and music were introduced as extracurricular activities in 1973. In 1982, using the touch-and-feel method, the Academy introduced classical dance, which has become a means of introducing students to audiences worldwide. Since 1983 the Academy’s students have toured India, UK, US and Italy. In India alone they have performed in some 2,000 shows.

The membership’s hard work, commitment and single-minded devotion to the cause have made SRMAB the success it is.

THE 2017 celebration of International Yoga Day may have surpassed any prior level of communal and governmental participation around the globe.

Since its inception in 2015, June 21 is celebrated as International Yoga Day in countries all over the world. The idea was proposed in 2014 by Indian Prime Minister Narendra Modi. At the United Nations

General Assembly, he said, “Yoga is an invaluable gift of India’s ancient tradition. It embodies unity of mind and body, thought and action, restraint and fulfilment, harmony between man and nature, a holistic approach to health and well-being. It is not about exercise but to discover the sense of oneness with yourself, the world and nature. By changing our lifestyle and creating consciousness, it can help in well being. Let us work towards adopting an International Yoga Day.”

For the twelve days leading up to this year’s Yoga Day, the Central Council for Research in Yoga and Naturopathy (CCRYN) launched a bevy of life-size mascots to help spread yoga and wellness awareness to children. The mascots, and the flash mobs they starred in, connected with families by providing entertainment and interactivity. They appeared at malls, public places, events and recreational tourist areas in Delhi, Lucknow and Haryana. Watch a delightful YouTube video of one spontaneous yoga mob at bit.ly/YogFlashMob.

Baba Ramdev, popular hatha yogi and co-owner of mega-business Patanjali Ayurved, set a Guiness World Record in Ahmedabad for having the greatest number of people performing yoga at one time. Each of the 54,522 yogis was electronically monitored as they entered the space, far exceeding the 2015 count of 35,984 yogis that PM Modi guided in the performing asanas on the 2015 inaugural day.

IN JULY, 2017, A FEDERAL JUDGE rejected a motion to dismiss a lawsuit claiming California treats Hinduism unfavorably compared to other religions in its public education standards and framework. The suit was filed in February by California Parents for the Equalization of Educational Materials, a group that promotes the accurate portrayal of Hinduism in schools, and three Hindu parents suing on behalf of their children. “I’m pleased that the Establishment Clause claim has survived, because it’s actually kind of the heart of what we’re fighting over,” plaintiffs’ attorney Glenn Katon said in an interview. “The main thing we’re fighting over is the depiction of Hinduism in the California education standards and framework, which we claim is disparaging toward Hindus.”